Just to recap in case you've just come along to my site for the first time ever. On Friday 1st January 2010 I decided to take on the challenge of writing, recording and releasing one new song every single Friday the entire year, which I thought would be a grand total of 52 songs. Turns out there are actually 53 Friday's in 2010, I didn't know that until a few weeks ago!

Anyway, it's finally come to an end and after a years worth of recording, writing, mixing, mastering, snapping guitar strings, breaking mic stands and not sleeping I released the 53rd song of the project this evening entitled 'Cradle To Grave'. I'm actually pretty tired now, and I'm off to bed, when I'm feeling a slightly more alert I'll come back with some reflection and highlights of the year and the project! Happy Xmas, Happy New Year, and have a great 2011! Thanks to everyone who's helped me, put me on a stage, played with me, shared me, streamed me, liked me, re-tweeted me, collaborated, been in videos and everything between!

After what seems like an eternity, I've now actually got some stuff onto Spotify! Two older releases Darn Snail Like, and The Pilot Episode are on there along with Selected Demos 2002 - 2009 and just to make matters slightly confusing Selected Demos 2002 - 2009 was obviously released under my full name Adrian Killens whereas the other two are under Aidy, but if you're an Aidy fan I'd like to think that you're intelligent enough to find all three and maybe even make yourself a Aidy playlist ;-)

Just in case you've got no idea what it is that I'm actually halfway through, allow me to explain. On the 1st January this year I began the arduous task of writing and recording one new song every week for a whole year, releasing each new song as a free download here at Aidy.com every Friday. Song 26 has now been and gone, and I haven't missed a single week yet, so I'm extremely pleased with myself! The original motive for starting the project has started to blur slightly and I'm now not sure if I'm doing as some kind of creative challenge, a marketing ploy or possibly as obsessive, compulsive endeavor, recently it feels a lot like the latter. The lyrics have got weirder and weirder along with the titles themselves, but none the less I've made it through fifty percent of the project and I'm still motivated enough to see the whole thing through to the bitter end. It's not always pretty, and I've definitely put out a few tracks I'm not that keen on, but on the whole I'm really happy with what I've achieved and I've added some great new songs to my repertoire, which I wouldn't have written had it not been for the project. I'd liken the whole thing to a weekly comic strip like Dilbert, the content's always there waiting for you, it's not always Shakespeare but it's entertaining, quirky and every so often you might just find something that strikes a chord.

I felt extremely privileged earlier this week when I received a call from the wonderful Tom Simkins at BBC Radio Cambridgeshire, asking if I’d like to come on air for a second time to chat about the end of the Song A Week project. We were on Sue Marchant’s Big Night In this time around, where we enjoyed an informal chat in which my drummer Paul Richards got compared to a Springer Spaniel and we even got to play a few songs live in the studio. 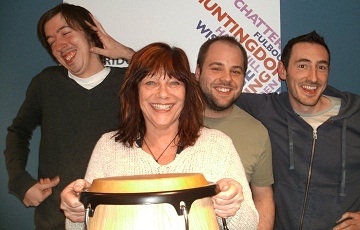 I have some bad news, and some good news! Bad news is that Spooky Doo has been cancelled this Saturday, so apologies for anyone that was intending to come along to see us play. We were really looking forward to it, but due to unforeseen circumstances it’s no longer happening :-( Okay, good news! We're still very eager to perform this Saturday and so we're going to try something a bit different! We'll be playing from a top secret location in Cambridge and broadcasting the whole thing live on the internet at:

The location is quite small but we may be-able to accommodate a few people, so if anyone wants to physically be there then drop me an email, and I’ll see what I can do. Once again, I’d like to apologise for the cancellation but we hope you’ll join us online this Saturday.

A friend of mine recently mentioned to me that it'd be cool if there was some way of listening to the Song A Week project as a playlist, rather than by having to click on each little play button one by one, which makes sense since there are now 34 songs as I write this. So I now have a newly created SoundCloud play list, which I'll try to keep up to date as the project progresses! Check it out!